YOU CAN"T IGNORE IT FOREVER 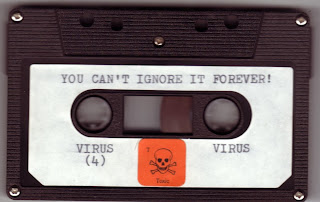 VIRUS. One of (at least) two 80s UK bands using the moniker, not to mention the (at least) two bands from the states who chose it as well. This VIRUS, from North Dorset, only managed to crank out two demo tapes before splitting up, but the second, "You Can't Ignore It Forever," is a brilliant slab of UK/anarcho punk that is loaded with fucking fantastic tunes. They had a track ("Oven Overture," from this demo) on a Mortarhate comp after they called it quits, and then 1/2 of the band started up again two decades later. They released an LP in 2007 which I have heard is actually quite decent, and you can check out their current goings on here. Killer tape to kick start your Monday, enjoy.

hi, this blog is incredible, i dont speak english very well , but i like 80s uk punk a lot. i only have the infected demo, the live in bournemouth and live in gillingham of this band, and always search for thistape. according with kill from the heart this tape had 17 tracks and this only have 16, do you know what happen with track 1 "toxic"??

keep the incredible work... im a real fan of the 80s punk tapes.

hi gabe, time ago i has the punk belongs to punks blog, if you want, i can send the live tapes of virus to your mail.

any body wants it too?