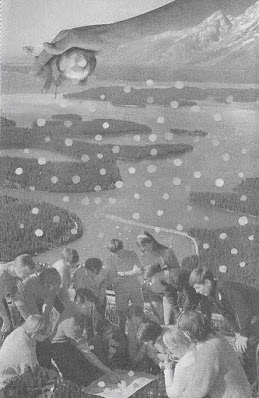 When bands sound like they are trying to sound like they are from a different, but specific, time and/or place, sometimes it's good, but there's also a higher bar because the bands are doomed to be compared to the best artifacts from that time and/or place. And even then, who really needs another version of the exact same thing that they already like (DIS bands and squirm stomps excluded, of course)? And this is exactly how bands like DEAT BEAT POET SOCIETY stand out - by standing alone. Pop at their core, to be sure, but this band is like a puppeteer pulling strings that tug on the remnants of my heart left in, cold wave distorted through '60s Nuggets, in dream pop, in '90s college/alt, in sharp robotic punk, in STOOGES and TELEVISION...and the puppeteer laughs because DBPS are none of these things, and owe nothing to any of them. They've tricked you, and they've got you, and as they pull you down deeper you forget the moment that you found yourself hooked. Because this band is from their place and their time...and you want to be there. So....you go. "Social Anatomy" on repeat all day.

Email ThisBlogThis!Share to TwitterShare to FacebookShare to Pinterest
Labels: Canada