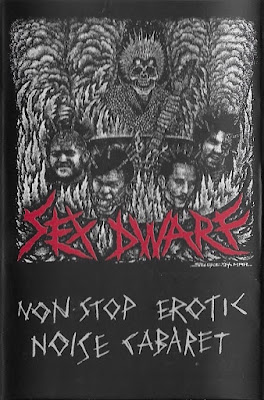 I know these Swedes flew just under my radar for a while - but that's my problem, and I hope to make sure that it's not yours. I heard about SEX DWARF a few years ago; they've been quite busy lately (I know this because: Internet), and I pretty much always assumed they were gonna be killer when I got around to checking them out. Vocalist Per doesn't really do "decent" bands - he just sticks with the rippers (PROTES BENGT, FILTHY CHRISTIANS, BRUCE BANNER) and SEX DWARF is no exception...except that holy shit I was still not expecting this. From the high speed pogo fury of "Din Gud" to blistering all out DBeat/noise assaults like "Märkt Av Livet," where your only breath is hearing the wash of the cymbals fade away while the bass blurs ferociously into the song's second movement, these fifteen tracks are relentless. You know the kind of release that makes you want to just rest for a minute after you listen to it....? That's Non-Stop Erotic Noise Cabaret. Well, I went back and listened to "Erat Spel" a few times in a row just to figure out what the fukk they were doing, but then I took a break. 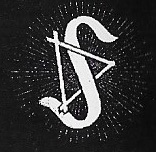 12" wax by D-Takt & Råpunk and Konton Crasher, this cassette version is from KL label/store Tandang. Physical possession is sometimes recommended....today it is necessary.