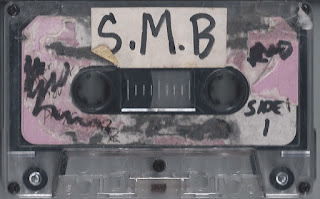 When I first moved to San Francisco in the mid '90s, it took a while to develop a social circle. Most weekends were spent with John and Matt snorting speed, listening to that MENSCLUB disc on Bar/None (Side Note, punks: this one is pure fire and motherfukkr creamed the drums like few fools I've ever witnessed), and talking about our band - I didn't really know anyone else, and this is a hard place to meet people. Eventually we started to fall in with a solid crew with whom we shared familiar common denominators like music and drugs...and that's where we met a dude named Steve. My memory says Steve played in TINA, AGE 13 (for the purists and historical perfectionists: the internet says this is not so), but perhaps Steve played in CORDUROY (?), and Steve definitely lived at 109 Cypress (I mean...probably? I might be wrong here. He definitely did drugs there). 109 was a weird and dark place where I spent many mid mornings out of my fukkn mind...it was also a place inhabited and frequented by a bunch of fukkn geniuses. Steve played drums for FUCKFACE when we played a set of HICKEY covers for Tania's birthday party (that was the night HICKEY played a set of SABBATH covers as surf instrumentals - a legendary night in my brain) and was an all around solid dude who was always...all around. I honestly do not know how I came by this tape, and I didn't know that these sounds even existed until recently, but I can't say that I'm surprised. Equal parts '90s Mission, VASELINES and DINOSAUR, this collection of recordings is an actual portal into genius unrealized (or underutilized?). The combination of brilliance, innocence and freedom is a hard one to fuck with.

I remember you texting me a picture of this tape and asking "what is this?" I immediately turned to Shell and Shag and they immediately said "Steve Merritt Band!" If only everything was that easy.

You were the first person I asked, too. It was so obviously from that time and place, but back then I had know idea he was responsible for this kind awesome.

What a gloriously ragged treasure. It's America's answer to the C86 scene, and above all it is better. Much appreciated!

Btw, riffs from MENSCLUB - Fly sound very similar to the ones of DIMMU BORGIR - Stien. Seems like a funny coincidence.