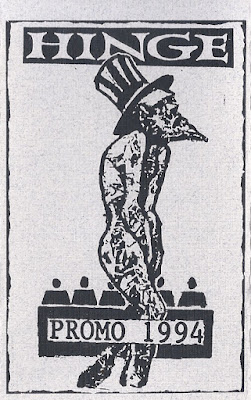 Karoline and I just had a discussion about the HICKEY/FUCKFACE show she booked in Milwaukee in '96...I have always thought that HINGE was one of the locals on that show, she thinks that they had probably split up by then, but we both agree that we spent most of the show making out in the front seat of a double parked brown Ford on Oakland Avenue, so the memories are good ones either way. I have had a different HUNGE recording floating around since that era, but I snagged this one from Daniel when he was purging a couple of summers ago, and it's way better than the one I've been listening to. Four tracks of impassioned basement DIY with a heavy DC influence and killer swarms of guitars. I've said it countless times in these pages, but I miss bands having the freedom to write like this without instant access to every subgenre at their fingertips...I miss songs like "How The West Was Won" popping onto tapes and steering your listening in an entirely different direction. So whether I saw HINGE or not, I'm glad to have the sounds. And if, in fact, didn't see them? Well, it was a really good make out session, so no regrets.

That evil bass in Psalm so fucking good.
thanks W i z a r d!

That Hickey show changed my life.