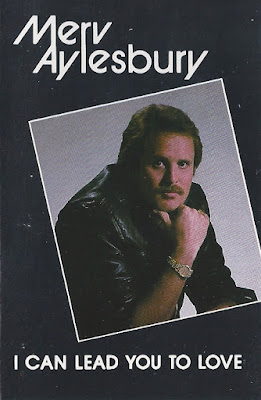 There must be innumerable MERV AYLESBURYs languishing in cut-out bins around the United States. Over produced schmaltzy country pop with horribly dated keyboards and processed drums, the absolute worst that would-be-radio-rock had to offer in 1986. So....why do we like it? We say that we like to make fun of it...but we keep listening, don't we? There's the arbitrary hard rockin' "Angel Looking For A Place To Fall" (what you doin' here if desire hasn't called?) with its unnecessarily ever present guitar and cornball tracks like "My Kind Of Woman" that would make Christopher Cross ashamed for what he did to pop music (sometimes she's less than a lady // sometimes she talks like a saint). There's a glimmer lyrical hope on "Two Against The Night," but when Merv slows down on "We Can't Do This To Love," any dreams of finding even a historical justification for these sounds are finally crushed. But still we listen...because the 25¢ bins just keep on giving.

I CAN LEAD YOU TO LOVE
Posted by the wizard at 6:04 AM

c'mon The Wizard, this is getting ridonkadonk

Keep in mind that when Merv toured, his crew beat up punks.

With this Aylesbury character it seems the pleasant timber of his voice is what makes us keep listening. It goes down just too easily. Makes the schmaltz easy to swallow, like the weakly poured cocktail in every motel bar called Dreamers that exists in every motel in the Midwest. Merv's the man. Good call on this one.

Willie Nelson wrote one called..'Write your own song.' Sort of apt for those 'wannabee's' who never accomplish anything on an instrument, never wrote a song of their own and never played, did shows or close to a sniff at a stage other than wanting to blow the artist. This guy eventually got endorsed by Gordon Lightfoot himself, check it out. So I see you have to go through an idiot in order for approval? Smacks of Jealousy and lifeless wannabe ego here? Can you tell us dear blogger... what you may have accomplished? Betting... Nothing.