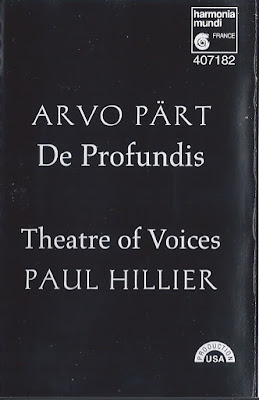 I'm no expert, I can't pretend to be. I was introduced to Arvo Pärt by my bandmate Betsy in the late '00s and since then I have explored only casually...but the results have been quite rewarding. Estonian by birth, Pärt was initially influenced by baroque composers, but was received poorly by authorities when he started to expand his horizons. Allowed to emigrate in the '80s to Austria, he began to delve deeper into the untraditional, and is considered a pioneer of holy minimalism....yeah, I don't know what that  is either. Subtle and extremely intense music, and it's worth nting that this entire recording was conducted with Pärt in presence...just because that makes it heavier. Like I said: the results have been quite rewarding.

THEATER OF VOICES
Posted by the wizard at 12:38 AM

Thanks for posting this-I never thought I'd be downloading Arvo Part from Terminal Escape! For my money he's one of the best composers of the 20th century. Proof that TE really does host music of any and all kinds!

What a tremendous recording. Thanks for sharing!