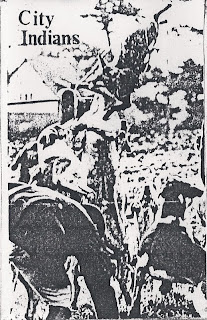 I originally posted this one in the early days of The Escape, and recently dug the tape out again to repair the dead link. But after blasting it a few times, I figured Spoilsport warrants proper re-posting instead of a fresh download buried beneath four years of posts. Either ripping metallic UK82 or rudimentary proto anarcho/metal/punk depending on their intent, these tracks are searing and fiercely (shamelessly) political in a way that bands just don't seem to be anymore.

For the curious, here's the blurb that accompanied the original post:


CITY INDIANS hailed from Derby, and this is the Spoilsport demo from 1986. Relatively basic, but super in your face UK82 punk, with a very serious animal rights angle. (It is sometimes astounding to me just how fucking political a large part of the DIY punk scene was in the UK, and equally bewildering how much a large part of the scene in the US today is just simply not.) Killer four song demo, that probably came 4 years too late for anyone to get really excited about it at the time. But now? This guy is excited.
Posted by the wizard at 6:14 AM

A lot of thanks,I've been waiting for it a long time,great !! Best wishes Erika (from Berlin)

Thanks for this, is really enjoyable for those like myself who have a soft spot for UK anarchy punk.