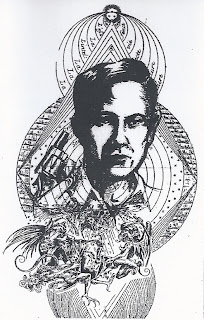 I heard the WICCANS LP when it came out, and I thought it was really good. Better than just good, like really good, as in "fuck man, this is really fukkn good" kind of good. And then I snoozed, as I too often do. Never bought it, probably spent my time converting tapes to digital files for a bunch of sad fukks to devour (not you, the other people), but I still thought WICCANS were really good. But some other records came out (there are a LOT of records that come out), and I got distracted by stuff (not difficult) and I kinda forgot about WICCANS. Then a few weeks ago I spent a few days at hardcore's annual jerk fest in Texas (aka The Thing I Do Every Year Because It Validates My Existence As An Adult Punk) and I noticed that WICCANS were playing a show at Beerland. The schedule gods were kind, and I found myself in a kinda half full bar watching Denton, Texas' finest hardcore band teach me a thing or two about life choices. Lesson 1: When the record sounds really good, BUY IT. Lesson 2: WICCANS are the best band on the planet. At least, at that moment they were. And to be fair they were still probably only in the top 5, but that's still a seriously short list. They fukkn killed. It was perfect hardcore, the songs were amazing - every one of them could have been stuck in my head for weeks, the dudes were super energetic but inwardly directed and kinda nerdy and awkward acting...it was everything I wanted. And then I bought their tape (which, incidentally, is the cassette version of that LP that I thought was "really good" a while back) and I brought it home. And then I listened to it....it's really fukkn good. How they do something that sets them apart from the herd I can't exactly quantify, but even if you think WICCANS are good when when you first listen to them, I promise you that they are better than that...they are really good.

Too bad you didn't get the Demo, only have a couple songs from that tape, been trying to hunt that one down over 2 years. Demo stuff I have is cool, but missing half the tape. Anyhow, I agree, Wiccans rule ! You come accros the Demo, please rip it !

I had pretty much the same reaction. Saw them at Trailerspace Records at CIT. The show was wild with chairs being thrown and everything and they ruled so i bought a tape. Super catchy stuff!

Man this is really fukkin' good!

Wow! This is good! I mean really good! So many intricate little hooks. Yes!

the new LP comes out in a matter of weeks too!