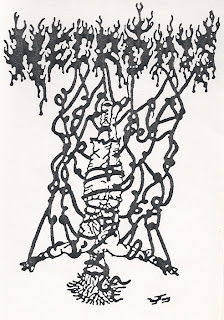 Death metal ain't my thing. Those words might read as blasphemy to some, but the genre has never really grabbed me. However, I like to think that I am open to change, and maybe one of the first steps in my journey is the 1992 demo from Minneapolis' NECROMIS. Chances are good that I'm not about to start ravenously devouring CANNIBAL CORPSE outtakes, and I don't see myself moving to FLorida in the near future, but these six songs are pure gutteral bliss. Primitive and raw, it might be the wimpy (and dare I say punk) recording that helps sell me on this, or it might be the way NECROMIS churns through their riffs like a downtuned disposal surging forward with the help of double bass and frantic blasting. The slow moments creep ominously, and when NECROMIS play fast they also up the intensity by dragging guitars through the gutter and leaning on Greg Chilton's throat searing exclamations. NECROMIS faded away after two demo cassettes, but this slab almost makes me wonder if perhaps I need to broaden my horizons. Probably not, but it's worth considering.

NECROMIS
Posted by the wizard at 8:54 AM

Robert,
My niece's dad Aaron played/plays bass in Necromis. One of the first metal shows I ever saw was Necromis at this fucked up sketchy record store called Northern Lights in downtown MPLS. A real game changer for me. That is so rad that you have this demo. Brings back some OLD memories. If you are interested, they have some other shit I might be able to dig out of a box somewhere. Thanks for doing an awesome job!!

I had a few of the demo tapes from when the awesome Metal Massacre at 1st Ave used to have metal marathons!! Those were the days. I am desperately seeking these old demos as mine were loaned out and not returned!! Curses!!

Man, I used to be at every show Necromis played at, especially at the later Mirage. I had Their demo cassettes, and of course some pieces of crap broke into my place and stole everything. If anyone has their first with Grimore on it, I will pay you to burn it or copy some way.