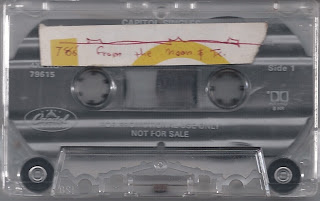 More relics from the era I delved into yesterday. I toured with LOST GOAT twice in 1999, one of my favorite stints on the road with three fantastic people. Tina brought this tape with us, and it was absolutely perfect for late night drives and quiet lulls while everyone was napping. The side titled 78s From The Moon & TX sounds like exactly that, 8 tracks of crackling sound from times and places far removed from our reality. Through the power of technology I was able to identify XAVIER COUGAT, TEX RITTER and LOS CHURUMBELES de ESPAÑA (the power involved holding my phone up to the computer and asking Mr. Shazam who the fukk I was listening to, in case you were wondering), but the other five artists are a mystery, which doesn't make them any less wonderful to the ears. 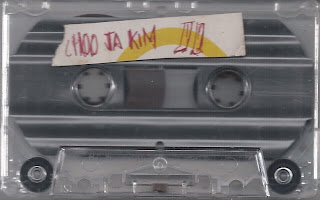 On the flip, Korean '70s garage/psych star CHOO JA KIM. Six tracks taken from one of her (many) greatest hits releases, laid back and far the fukk out, with a voice suggesting a beauty every bit as real as the woman behind it. Picture NANCY SINATRA with JEFFERSON AIRPLANE and present it through the acid filter of the early 1970s and you'll be in the ballpark - listen in the dark and you'll be in love. 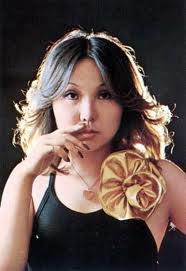 I love listening to this. It makes me want to be on that long late night drive through west Texas on tour right now.

if anyone is interested in the titles of kim choo ja

This link has died. Could you please update it, Mr. Beardo? Thanks Robert!