FLOWERS IN THE DUSTBIN 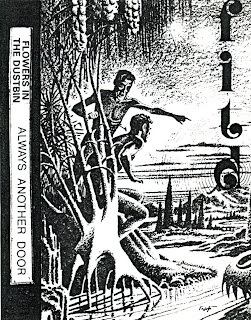 South London genre bending anarcho/art/goth punk circa 1982/3.  FLOWERS IN THE DUSTBIN seem to have lived on another plane(t), and the result on this demo is disjointed, awkward, out of tune and engaging dark punk.  There's a lengthy interview/history courtesy of Lance Hahn (from one of his many anarcho punk profiles in Maximum Rocknroll) that covers the band's past in great depth, and from that article you can hit the band's download page and enjoy their entire catalog (might I suggest starting with the brilliant Freaks Run Wild In The Disco?  yes, I might).  "All Fool's Day" appears on their 1985 Mortarhate EP in a much cleaner version, but for me, the out of time and out of tune approach to this demo is most excellwent.  In terms of influences, bassist Chas says: "Between the first SEX GANG CHILDREN album in 1983 and THE FALL's Bend Sinister in 1986, the only contemporary music that excited me was ours and the only contemporary band I listened to was the COCTEAU TWINS (THE DOORS I remember as being a band we all liked?)." And the singer's response: "I think we all liked the COCTEAUs, I hated THE FALL."

hey if youre looking for rare tapes check out a band called A.P.F. Brigade. for the longest time there music could only be found tapes. they're an old early 80's english anarcho punk band. God the Tape was their first one. you'll like them.