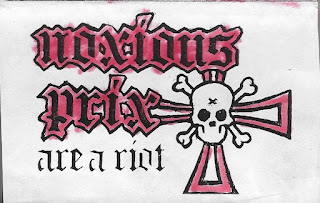 There was a hot minute in San Francisco when NOXIOUS PRIX were, without a doubt, the punkest punks. Full stop. The punkest. It was right around the turn of the century and I knew the guitarist Talon from STRAY BULLETS, but it was a casual acquaintance from playing together in Minneapolis. Seeing his new band of street rats in San Francisco was something completely different - they were wasted, they fought in the street, they were a hot mess...and they were great. They fukkn smelled punk, and you could even smell the difference inside Mission Records (if you know what I mean, then I don't have to explain it...and if you don't, then there's no way I could explain it). What makes this tape special though? NOXIOUS PRIX 'released' a tape that sounds like it was duplicated from boombox to boombox - no cables, just plopping one boombox in front of the other and blasting the shit. The songs are killers - all of them (but especially "War For Poor" and "Inner City") - but it sounds like a distant AM radio broadcast and all you want is to hear them sound better and louder and clearer but uggghhhhh it's so frustratingly sick to know that you never will.

NOXIOUS PRIX ARE A RIOT