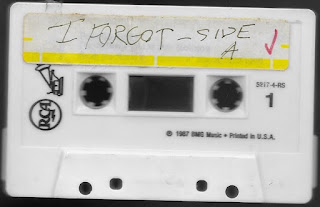 Sometimes a tape is a curiosity, then context and history just as (or more than) intriguing than the sounds it contains. My mind was percolating on I FORGOT long before I pressed play...the tape came from Pat's collection and it would be natural to suspect that he had simply forgotten the origin of the tape. Or the band could have been named I FORGOT. But pop this one in and there are only more questions - the sound is a clash of Bay Area pop punk, Revolution Summer and '90s Midwest basement emo, the second track (which might be titled "Stupid Melodic Song") is a perfect example of the melodic punk that was so pervasive in the mid 1990s (splitting hairs here - but I'm talking about a different brand of melodic punk than yesterday's BRAINSICK demo)...and I don't know anything else except that this band could have played the Mission Punk Fest in 1997 and kids would have eaten them up like candy. Maybe Pat simply forgot, but also maybe I FORGOT didn't make a cover for their two song demo dubbed on repurposed commercial cassette. Two songs. Probably '90s. Likely Bay Area...do your thing, internet. 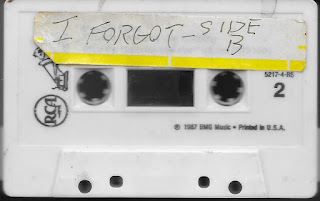 Email ThisBlogThis!Share to TwitterShare to FacebookShare to Pinterest
Labels: punk