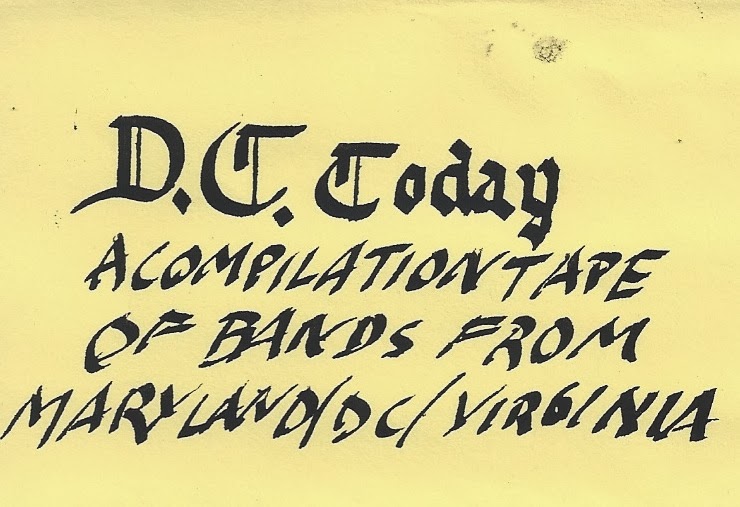 I could talk about this tape in the context of the Washington, D.C. metro area and the current crop of ridiculous bands from there. Or I could talk about this tape in the context of the importance of mix tapes as a tool for networking and underground community. I could also discuss this tape as a representation of the progression of the punk scene/sound from the early Dischord days onward. Or perhaps I could just say that D.C. Today is a brilliantly crafted document of punk and hardcore from the area circa 1989. Bands that you may have heard of include MFD, AGENT 86, and SHUDDER TO THINK, but almost all of this shit is new to me - the east coast hardcore is crucial, the goth punk is completely legit, the ska is....well, it's ska but there are only two or three songs, and the sporadic between track phone interviews are fukkn brilliant little time capsules. I know Mike probably made this for a few friends, but I could not be happier that a cope made its way into my hands. Favorite jams: DESECRATION, GUT INSTINCT, STOMP, RANCID (not the one you are thinking of), THE WAIT and STRANGE BOUTIQUE. This is why mix tapes are fukkn great, especially 20+ years in the future.

D.C. TODAY: A Compilation Tape Of Bands From Maryland/DC/Virginia
As an extremely pleasant side note, I realized well into the digitization of these jams that the compiler was one Mike Straight, who was one of the first punks I met who really let me know (inadvertently, perhaps) that I was on the right path. The idea of putting snippets from telephone interviews in between choice tracks fits perfectly with my memories of Mike, and hearing his voice is a blast from my past (even though I probably didn't meet him until 5 years after he compiled this tape). Last I knew, Mike bought a house that was a glorified squat in Philadelphia and had convinced someone to give him money to go to school. Maybe my memory is incorrect (as is often the case), but someone should put me in touch with that dude because he was always super good to hang out with.
Posted by the wizard at 5:16 AM

Agent 86 started in Arcata California in 1982, they were called The Fix from 80-82'. I know the guys that started the band, I have all their early stuff. The singer moved to DC much later and revamped the band, and now Agent 86 resides in Las Vegas.

MFD put out at least 2-3 album's and 5 or more 7" singles/eps. Toured quite a bit. Funny that they never made it to a CD. Maybe they did not want too.

i still have my copy of this tape. I remember when Mike was making this. He also used to have great basement shows at this parent's house. I gotta get in touch with him one day. Awesome dude. Thanks for the post.

Great post! Been searching for a copy of this tape for YEARS! Haven't heard it since '91. Got me into so many bands. Cheers!

Haha I was singer for man unkind. We played sevefal basement shows in mikes parents house!