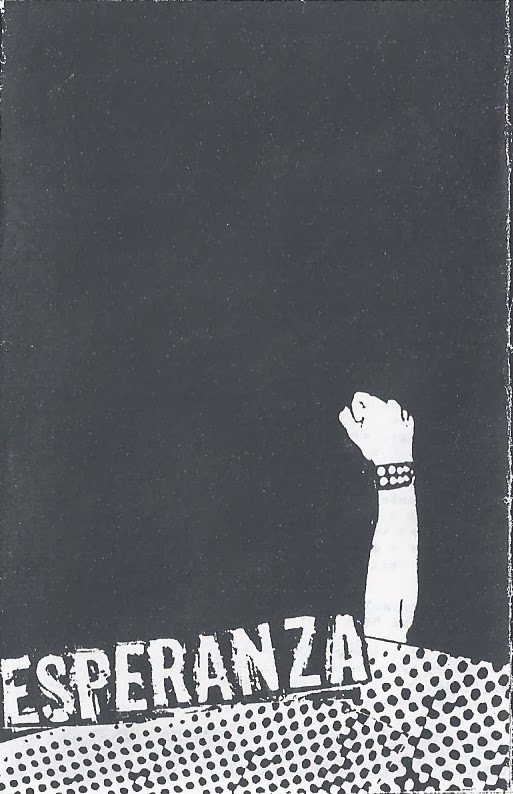 The first few shows I ever played in Los Angeles were beyond disheartening. By the mid-'90s we (the "we" in this sentence was FUCKFACE) had found a few pockets outside of LA proper, and had some great shows in Orange County and the Inland Empire, but Los Angeles was still a total bust. Everything changed in '97 when we (the "we" now refers to WHAT HAPPENS NEXT?) played a show at the PCH with LIFES HALT. It seemed like the whole metro area had just exploded with fast, political (and fun) hardcore bands, and a house show with DIRTY DIRT &THE DIRTS on a subsequent trip (actually, it may have been the day after the PCH show) solidified that impression. Young kids tearing shit up with intent and purpose were everywhere, and all of a sudden Los Angeles was the raddest place on the planet to play. Countless killer bands came out of that era, and like ESPERANZA, many of them were gone in the blink of an eye. Rich from DIRTY DIRT and Steve from THIS MACHINE KILLS (who booked the shows at The Pink House in Santa Barbara [wait - shit, was it Biko House? am I getting my decades mixed up?], another former strike out city that had become a great place to play) joined forces to crank out this powerhouse demo - bare bones hardcore with breakdowns that perfectly personify the brand of New Millennium West Coast hardcore that turned my life around and opened my eyes. These dudes were fun as shit but the lyrics are smart and visceral - and this eight minute demo and a few comp tracks (Histeria and Barbaric Thrash Demolition) is all we got. Rich and Jake went on to PLEASE INFORM THE CAPTAIN THIS IS A HIJACK (and Rich is now a PhD), Steve went on to be insanely famous but still the same dude the few times I've run into him, and the other members were in DESCARADOS, MUGRE and certainly more that I'm either forgetting or never knew about. This demo makes me nostalgic and determined without lamenting for the past - it's a reminder that whatever your "present" is, it's going to be somebody's "past," so you need to make it as awesome as you can.

THANK YOU FOR THIS!! Holy shit ive been trying to find ANYTHING from this band to no avail, until now. saw these guys at Gilman back in 01 I believe, it was with betray the species (RIP Makh!)time in malta and a few more I think..

also, if you want, check out/post my band! thanks!
www.bombmgh.bandcamp.com

The house from SB that Steve booked shows at was the Pickle Patch...sheesh I haven't seen that guy in eons.

One of the best shows from the era when Esperanza existed was when they opened for The Oath, Total Fury, WHN, and Life's Halt in Pomona. That show was legendary!