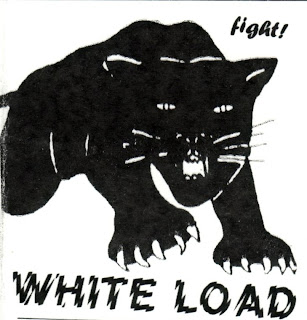 I cannot endorse the use of the Black Panther on any recording released by a bunch of white dudes in the new century (it was fine when HICKEY did it, but that was last century, and it was propaganda aimed at gaining Aesop's release from jail - where he was being held for being a sharpie wielding anti-pig terrorist). But I can heartily endorse the sounds that hide behind that image on this 2007 demo from Providence's most brilliantly named and brilliantly damaged garage punks. There has been a wave of bands approaching ramshackle garage music and delivering it with the intensity of '80 Midwest hardcore, and I'm full into it. Raucous and rebellious, these tunes are in your fukkn face and balls out rock 'n roll (no balls in your face jokes please, it's too easy). Four demo tracks, two covers that might offer a better clue to where these kids are coming from (and where they might like to go), the tunes from their then-unreleased My Wall EP and a live set on the flip side that captures every drop of the intense load left on the studio floor. Sorry, I couldn't resist.