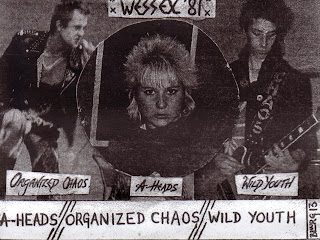 Not to be confused with the similarly titled Wessex '82 EP, also released by Bluurg, the Wessex '81 cassette also features bands at least loosely associated with SUBHUMANS. A-HEADS are criminally under appreciated - these songs could easily qualify them as the English AVENGERS, they just don't have the catalog (or recognition) to command such comparisons. "Isolated" is a timelessly brilliant song that sounds every bit as important today as it must have 30 years ago. ORGANIZED CHAOS are the stars of the tape, and also appeared on the following year's vinyl Wessex collection with A-HEADS. Killer driving UK82 punk (technically, it's UK81, but is it really worth splitting hairs?) that could have easily found a home on Riot City. WILD YOUTH blaze through four tunes of their own, with a slightly more laid back but snotty approach - "Plastic Age" and "Last Punk In Town" are true winners, even as the tape starts to give way towards the end. ORGANIZED CHAOS and WILD YOUTH both came from the ashes of STUPID HUMANS, who also spawned the slightly more well known SUBHUMANS. I sold the last copies of these on tour, so I cannot offer you one for your very own, but I'm pretty shit at sending people things they ask for, so that's probably for the best anyway.

In other news...if you live in the Southwestern part of the US, go see my pals NEGATIVE STANDARDS on tour. I just played their "we are going on tour" show last night, and I assure you that they are well worth your time. If you like to get crushed, that is...and I know you do.