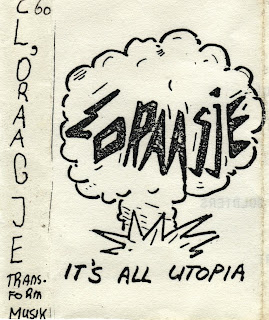 I listened to this tape dozens of times before I even got around to ripping it, I kept getting drawn in by the  often unsuccessful attempts at anarcho/post punk, and found that L'ORAAGJE were often more successful when they failed. 1983's It's All Utopia was the only release from this Dutch outfit, and it's a full hour of experimental avant punk noise with guitars and occasional synth very reminiscent of early '80s CURE tracks and an approach to punk that owes as much to THROBBING GRISTLE (check out the 10+ minute "Destroy") as to primitive punks. I asked Jos about L'ORAAGJE, since he is old and Dutch, and it was no surprise to me when he just sent me to former member Jan. Jan told me that members went on to form the decidedly more goth FREISCHWEBENDE INTELLIGENZ while he continued with POST MORTEM (not the UK band obviously) and CONTACT T.B.D., and continues making noise that can be found here. Get into this - TRANSFORM MUSIK.