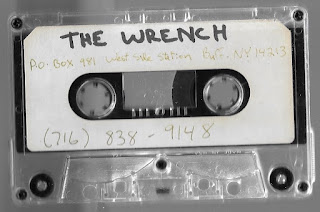 This mysterious gem from Pat's collection is full of gritty, early '90s hard driving college alt that would have fit nicely alongside SOUL ASYLUM, early GOO GOO DOLLS, FLUID...even a taste of NIRVANA here and there. Check the chorus on the third track on the demo - "you're making fun of me again...I can tell" - it's gloriously innocent and just begs for anthem status, but it never feels slick. The harmonies on the following cut are more nods to GOO GOO DOLLS - "I'm drinking....I'm drinking way too much" could have been ripped from the grooves of Jed (which is still a near perfect record sans the CCR cover, fight me) and by the time the crunchy Cobain riff carries the post-chorus of the fifth track to the end of the tape I am completely hooked. The GOO GOO DOLLS observation isn't completely accidental, since the bassist recorded the sole full length from THE WRENCH, released in 1992 ('93?). That full length is way poppier than these five tunes, way cleaner, way...well, let's just say I like this one better.

THE WRENCH
Update: Four of these tracks appeared on the self released "Cop Krueller" EP in 1994.
Another record that I want now. Great.
Posted by the wizard at 8:06 AM