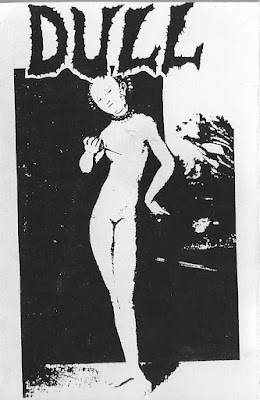 The thing about the relics of 1990s USDIY punk and hardcore is that otherwise devastating bands come out on the wrong side of historical street fights with fidelity and proficiency. Take Michigan's DULL, for example - this 1995 demo is an absolute motherfucker of grinding crust brutality with dual (dueling) vocals and a breathtaking, primal, approach to North American crust. It also sounds like total shit and it's super fucking sloppy. For listeners with my ears, you'll hear LOGICAL NONSENSE, DROPDEAD, SIEGE and BUZZOV•EN and filthy, damp basements and sketchy scenarios. If you're looking for the coolest modern hardcore band with all the right moves....then you definitely need to look elsewhere. This shit is real. And awful, to be clear...but more importantly: real.
DULL