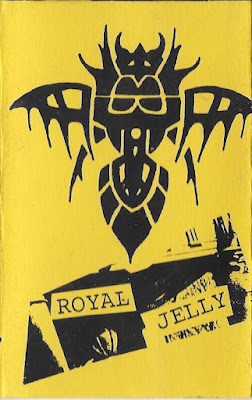 The REINA AVEJA trip from Florida to California blew a lot of minds in 1998. They just casually laid waste to every band they played with...heaviness that came from another world delivered by women who came from the other side of this one. The approach to sludge-laden slogs was punk, which brought justifiable BUZZOV•EN comparisons, but the approach to punk was fierce and femme in the face of those comparisons. They recorded an album with Billy Anderson while they were out here, an album that has (unfortunately) never seen the light of day, and the band spread out shortly afterwards. The bassist spent has been in several bands since, and is currently in a freak punk outfit called GRP.TXT. I spent a couple of years in LAUDANUM with the drummer and her partner before I moved to Wisconsin...making noise with them was really fukkn fun. Anyway...someone should release that record Billy recorded.

ROYAL JELLY
Posted by the wizard at 6:41 AM