POKING A DEAD FISH WITH A NOT DEAD FISH 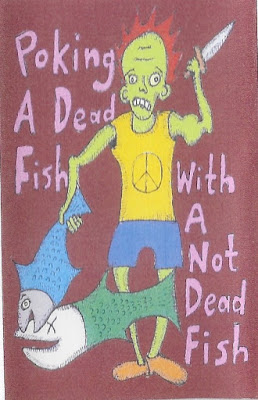 Once again, Food Fortunata and/or Friends are testing the limits of musical reasonability...this time with the unearthed project POKING A DEAD FISH WITH A NOT DEAD FISH. Nineteen songs about bowel movements, math, pickles, manual labor and whatever other stream-of-consciousness came out when the guys pressed <record>. Ponder wise quips like "construction was not created by a ghost, it was the dream of all large mammals" while you're trying to figure out if the music is a (failed) attempt to succeed or whether you're just the target of a cruel audio prank. No one does it better, fine visitors...no one.

POKING A DEAD FISH WITH A NOT DEAD FISH
Posted by the wizard at 6:16 AM