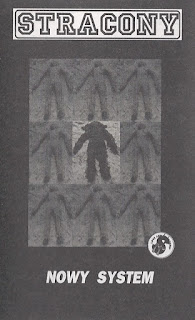 Few "modern" bands have so perfectly captured the vibe of early anarcho punk as well as Poland's STRACONY. Notice that I didn't say they recreated the sound, but rather they take ownership of the sound and combine it with their obvious '80s Polish punk roots. Female vocals chant stiffly in front of the music, accompanied only sporadically by equally sharp male backups while angular guitars feel like they are jabbing at you instead of playing you a tune. Nowy System was released in 1997, their second cassette full length, and the two 12" slabs are also well worth hunting down (Uwazajcie - Bomby Wisza Waszymi Glwami from 2000 and 2007's split with VIA MEDIA). Insistent and fiercely punk, I love this now as much as I did the first time I heard it.