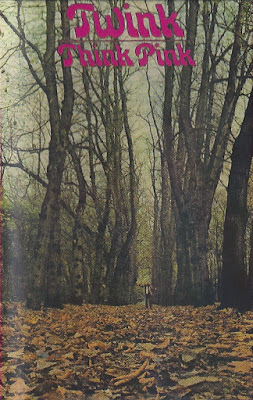 I work with this dude named Pete. He's a few years older than me, and was geographically blessed....so he saw BAD BRAINS in '79 and SSD in Boston in '81 and the Rock Against Maximum Rocknoroll gig in SF with AGNOSTIC FRONT and FUCK-UPS in SF in '82 where one of the B.A.S.H. boneheads got stabbed in the neck. By contrast, I saw THE DEAD MILKMEN in Tulsa in 1989. You see the difference a few years and a few hundred miles can make? Anyway...while I was getting into Punk, Pete was getting into jazz (he was done with hardcore by then, he's one of those rather annoying old(er) types who thinks hardcore died when they stopped going to hardcore shows. I'm all like "what about NAKED HIPPIES? What about LOGICAL NONSENSE? And that fool just ain't hearing it - at all), but Pete is a record nerd, and a few years ago after he had all of the jazz records he started digging deep into the hard rock record nerd world. He obsesses on $400 bonzers that are sometimes interesting, sometimes only noteworthy because they are rare, and sometimes readily available via reissue....but still, there's some jams in there and the dude's general taste is on point - I've used him more than a few times as a guide and/or advisor into the the jazz/freak rock underworlds, and his assistance is appreciated. So we were working together a few months ago and he was playing some tunes and I was digging them. They were heavy sounds....they were weird sounds...I liked them. The sounds were TWINK's 1970 LP Think Pink. All over the place and out of motherfukkn sight bizarro heavy psych/rock from a dude from PINK PAIRIES, and I was pretty instantly hooked - I didn't care if this was nerd fodder or $1 bin chud because the sounds were pristine. So I used the internet and I ordered a Burger Records 2013 cassette reissue while I was taking a dump (on the clock - "never shit on your time, never sweat on theirs") and before I left work that day a copy was headed my way. The reissue features an entire B-side of outtakes (and, jahbless, they are excellent), and I have listened to this tape countless times since it dropped through my slot. So...even though hardcore didn't die in '84 when Pete stopped going to shows, I am glad that those "other" ears are in my life to help keep mine open. Now....open yours.

Given that I'm a Hawkwind passport holder, you'd think I'd been all over this Twink thing from day one. And you'd be wrong. Thanks for bringing me up to speed on this, alas some 47 years on. Mega cool post.

Best records hands down !
Thanks for sharing the outakes too !