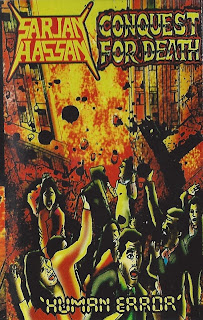 Malaysia's SARJAN HASSAN have visited the escape before, a full on blast of retro crossover thrashcore. Sick. CONQUEST FOR DEATH started as a project of sorts, and has evolved into a sporadic juggernaut  - a vessel that has brought a constantly evolving network of friends to half a dozen continents. In 2006, our pal Kiku (ASSFORT, CHARM) was visiting San Francisco from Tokyo and he and Devon (WHAT HAPPENS NEXT, ALL YOU CAN EAT) concocted a one-off studio project. The project included Alex (SAY BOK GWAI, cult Bay Area '80s thrashers MORBID LIFE SOCIETY) and was recorded by Craigums (YOUR MOTHER, WHAT HAPPENS NEXT, LOVE SONGS) who not surprisingly contributed guitar work to the project. The result was a self titled EP and plans for a west coast stint later that year with CHARM and Tokyo's fast/noisecore monsters U.G. MAN. I was drafted for that tour, and the next few years was/has been a whirlwind that included members from three countries and tours of five (soon to be six) continents. The songs on this split were culled from that first session, written and recorded in one afternoon. 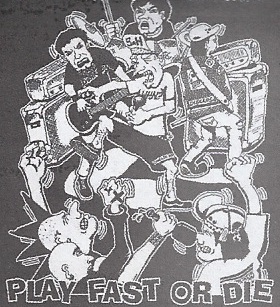