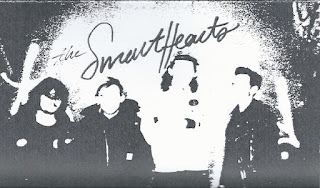 Sometimes I like things in private. There are records (and tapes) that I fucking adore and listen to with (alarming) frequency that I rarely talk about in the company of anyone outside of my most trusted friend circles. I'm not ashamed, per se, it's just that I don't think that most folks would get it, and discussing the brilliance of uncool things is sometimes a thankless task....so why bother. Power pop. It's a tough one for some people, it's a deal breaker for others, but when delivered properly it can be pure perfection. The vocals, slightly out of whack on "No Remorse" and straining for that '60s gravel and drive that made EDDIE & THE HOT RODS so damn good even though you knew they were punks. You know what I mean? There's that thing that you can't really nail down but it's fukkn there, and this is why I don't talk about shit like this too often. But seriously, this four song demo is soooooo sick. "No Remorse" is clearly the creamer du jour, but feel "Let's Ride" kick in and it's almost like you are listening to the ancient groups that M.O.T.O. modeled their existence after (for real thoguh, the start of that track could almost be a rip of "All Night Vivarin Jag," which is the second best M.O.T.O. track ever...."Gonna Get Drunk Tonight" is obviously the first). My point is simply that this four song cassette by THE SMARTHEARTS is really fukkn good, and whether or not you want to admit that to your cool punk friends is entirely up to you.

Email ThisBlogThis!Share to TwitterShare to FacebookShare to Pinterest
Labels: philadelphia